Church and state rise to a whole new level in the newest Matt Damon offering. But is it heaven? Turn the knob in the other direction and the door opens to lies, voyeurism, angels in Mob suits and fedoras who carry out the “plans” of the Chairman/woman. This film ventures into the classic debate: free will vs. puppeteering. The argument becomes most problematic when we assume that it’s God’s plan that only supports certain power-wielding individuals in their quests to become famous. “Leave with her and she loses her dreams of becoming the most famous choreographer in America and becomes a dance teacher for 6 year olds.” Loathsome profession, eh? Shame on them. So, LOVE proves to be the only alternate and inescapable plan-changing force that can get in the way and undermine the plan while gaining the respect of the so-called “Chairman,” played by BBC’s own Jennifer Ehle (Pride & Prejudice 1995). Arguable theology, yes, but captivating stuff which memorable film plots are made of? No. 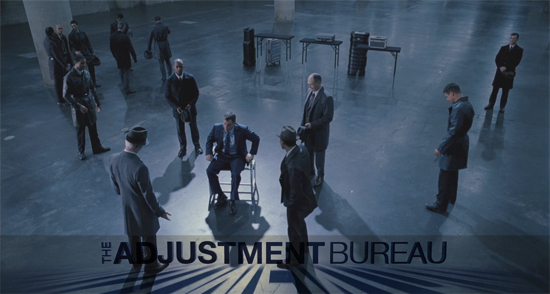 Matt in his opening sequence is brilliant and oh-so loveable as the “honest” politician. Lost you yet? His scene with Emily Blunt stops time. Then we wait. We wait and we wait for movement, for color, for fun, for a kick that wakes us up from this, another in the Matrices of attempted fate talk. We wanted him to see through “them” in the end, but they weakly let us have what we think we want at the end. The film feels forced far too often. I loved certain scenes, but unfortunately the idea that “true love conquers all”…even the subversive plans of a Zeus-esque diety don’t hold water. Speaking of water… In this film could water mean Chaos? Freedom? Free will? The fluidity of choice within the concrete structured grid lines of governmental, forced compliance? Perhaps. Stop running, Matt. Just stop.
(Ironically, the picture below contained two film titles cut together into one shot. An accident?  …C’mon.) 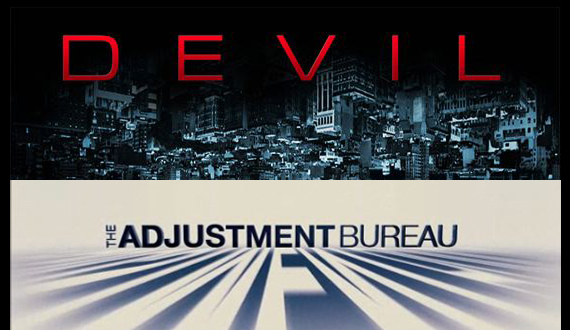