The stage lamps are lit, the horses in place. The curtains newly mended and the hay fields cut.

Director Joe Wright choreographs the tragic loves of Russian elites who must choose between duty-bound, repetitive lives of show and the destructive feeding of appetites. One thing that I love about Mr. Wright’s direction is that period pieces do not call for period characters. They are very real people. This I believe is actually due to  the brilliant screenwriting of Tom Stoppard. 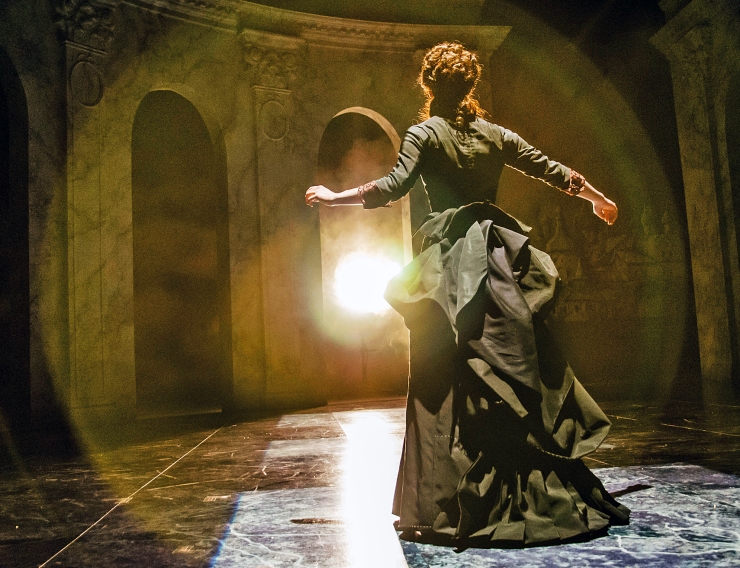 It is not Tolstoy‘s ancient sin story that coaxes the audiences to enjoy this film, however. It is Joe Wright’s direction.   Wright works special magic on screen. He made his mark early on with long choreographed pan shots like the scene following Elizabeth Bennet through the entire house for the party in Pride & Prejudice (2005) and the incredible Dunkirk sequence shot with Steadicam in Atonement (2007). These were just the dipping of a toe compared to his work in Anna Karenina.

Shakespeare said, “All the world’s a stage.” Wright must have agreed when he set Anna Karenina almost entirely on stage. Do not miss the metaphor of Russain aristocracy living for show in Anna’s time.

Taking the politic of fishbowl living to new levels, Wright lifts Tolstoy’s characters from the page like little marionettes or figurines and sets them up to play roles on little play doll stage pieces. Moving players on intricate sets interwoven and laced, one set piece with another.

Lift the curtain on one stage and enter a warm dining room. Walk from center stage through the rear stage doors onto frozen tundra of the Russian countryside. Anna steps off the train onto the rafters above the stage where characters frozen in time offer downcast looks for her gossiped indiscretions.

“Divorce is one thing, but dinner is quite another” says MacFadyen’s quirky character who has just gotten away with yet another extra-marital tryst. He played the dashing Darcy in Wright’s Pride and Prejudice (2009) with Keira Knightly, obviously two of Wright’s favorites.

Morality plays of old showed the folly of immoral ways. This play showed both the domino crash from consistently compromising moral character and the polar joy of seeking peace, forgiveness, and purity. Too often a vacuum exists where only consequence is shown. Here birth and death meet and we see the frivolity of stage living purely for show as well as an equally fruitless existence if self-served.   The cessation of appetite alone can only destroy. The irony isn’t lost in the wings.

It is Jude Law‘s character, the husband Karenina, who baffles entirely. He who gives all for country, who supposedly forgives, he is the one for whom I believe this play / novel is written. I believe he is the central figure on stage. He takes the final bow, and only then do we recognize that his experience of living in the tall grasses of nature watching the children play is still only a guise, for the man still lives on the stage making choices for appearance sake in order to keep his good political name.

His parallel is perhaps Oblonsky, Macfadyen’s character, who runs his business methodically and can have his affairs and the forgiveness of his wife but is left literally standing alone in the cold, excluded from the joys of family.

“All the world’s a stage, And all the men and women merely players;”