J.J. Abrams, now sainted by the fan kingdom for performing the Christmas miracle of reviving an old whispered hope that Star Wars could return to its former gritty glory, did it. He did it. Every hint, allusion, repeated line, respected motif. It’s all there.

The nods to the Star Wars canon of films and universe lore were extensive. They allowed family and friends to participate on set in small ways and asked the old gang of concept artists to get back together to dream for VII.

I trust J.J. as a director for a plethora of reasons, and I respected him all the more when he called my friends who made this short “Open Letter to JJ Abrams” prior to filming to ask them for their thoughts as he started creating VII.

Anyone who could handle Trek fans with their Klingon blades at the ready can handle all of us teary-eyed New Hope hopefuls who just can’t handle any more 1-2-3 Jar Jar debacles.

Light, the constant motif, battles the Dark Side in thoughtful  parallels. The First Order, in the tradition of the Third Reich, allows Domhnall Gleeson his own St. Crispin’s Day speech as little Hitler. An incredible speech that no doubt would make the little Vader, Kylo Ren, jealous as they whine and fuss over who will sit at the right hand of Lord Snoke. 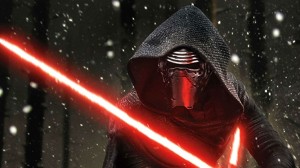 So the CGI worked, as it appropriately nodded to George Lucas and ILM’s life works but didn’t go overboard. Most CG characters were meant to be despised. The likable oracle however, Maz Knata, with her all-seeing tiny eyes, had Han’s approval and therefore ours. He nods, we nod. He falls, we fall. We may have seen it coming, but it’s still a shock, no matter how poetic it was.

The power of the force was treated exactly like I’ve seen addiction. Ben Solo, now Kylo Ren, craves it, seeks it, cherishes it, blocks out all others. He’s addicted, swallowed by it. His father wants to rescue him at all costs. Han’s fatherly love is beautiful and sacrificial. Perfect. 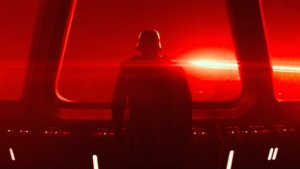 We also rejoice and applaud vigorously in theaters along with the new characters as they too rediscover old favorite characters, ships, weapons, and the mysteries of the force. My friend, Dusten (pictured below dressed as Kylo Ren for opening night, followed by his daughters in festive array. They are the best!) said that he loved how the three new characters were given Luke’s characteristics. It’s true, equal parts insecure orphan, trooper uniformed rescuer, and stellar pilot. 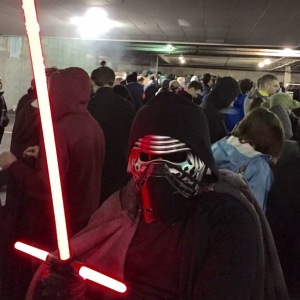 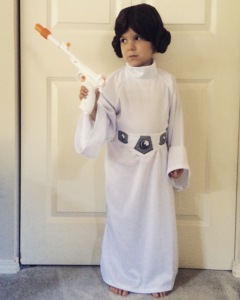 These characters are wholly delightful and still full of mystery.  Daisy Ridley’s Rey character is brooding and searching but full of the force, and she has yet to show us her true potential. She made us believe in her universe. As I always say, a main character has to be pitiable and good at something for an audience to buy in, and her survival skills on point make her both.

Fin, played by John Boyega, according to the exposition is basically one of Invisible Children’s rescues. He has his Jack from Lost’s savior complex in tact, and he’s reluctant enough to drop into any scenario with our support. We want him to win forever.

Poe is still a mystery, and I’m hoping that the next installment allows us to see his broken-hearted  backstory or career-driven intensity hault for comic relief or the greater good. Oscar Isaac. Love him immediately.

Leia, Han, and Luke looked good. The adventure is only beginning as there are worlds to save and new friends to make. So, may the light sabers of the season make your days all the more merry and bright.

You’ll have to go see it for yourself…

Happy Christmas to all!