James Franco is Tommy Wiseau . The Franco brothers tackle the ultimate duo feature. It’s Lennie and George all over again.

This making-of-the-movie film delves into the origin story of what has won the title for worst movie ever made. The Room has a wide cult following, filling late night movie houses with curious film fans and the friends they dragged there to cringe and laugh and throw popcorn with. Supposedly, every line is an accidental joke and every scene an even worse moment in acting history.
Yet many wonder if the madman masks a genius.

Wiseau paid exorbitant fees for equipment, cast, crew, and miscellaneous expenses over 20 years ago only to make this historical monstrosity. The Disaster Artist somehow deconstructs The Room and unveils the relationship behind the duo’s untoward success as it allows audiences an empathetic glance into an inverse Lala Land experience: seeking serious dreams and becoming the butt of the joke.
Speaking of butts. You see all of James Franco. ALL. All but the privacy pouch, so the R rating is not just for intense language.

I’m sure The Room IS as bad as we’ve heard, but somehow The Disaster Artist makes bad art human again. It’s the ultimate essence of modern art allowing the artists to remain more interesting and important than his creation.
James Franco won the Golden Globe for his impressive performance. Dave Franco expertly played the straight man opposite his brother. 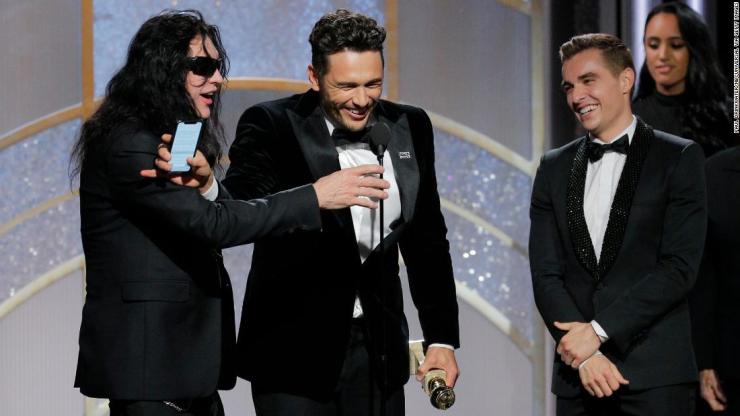 I have respected the co-writers of this film, Scott Neustadter and Michael H. Weber, since their brave breakout film 500 Days of Summer, and here they prove again that they can “take a sad song and make it better” by allowing all audiences to relate to the quirkiest of characters until we root for them to succeed, laughing them all the way into daily conversations and filmmaking history.