Heartbreaking. As essential questions go, this film delves deeper into the empathetic psyche forcing a mirror glance into beliefs about war and genocide than most want to explore.

A jocund former Juliet becomes starfighter as Hailee Steinfeld lifts lazer blaster to teach Ender, the young Asa Butterfield, how to win a very serious anti-gravity laser tag sphere game. The guarantee from the start is that it is all a game.  The government recruits children because they lack the fear and hesitation that comes with a fully developed frontal lobe. Instinct and impulse rule decisions, so in the training camps they learn to lead and develop war strategies in interactive gaming scenarios.

Warning, this film is NOT for children, despite promotional ploys. Children love games until the mask is lifted and the game becomes real. Young men feel bulletproof in war until they understand the gravity of the task before them and see themselves in the reflection of those they are fighting. This film lifts the mask, albeit slowly. 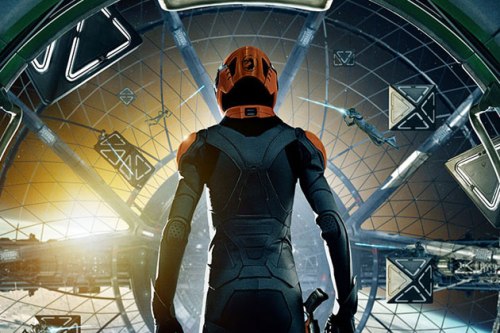 The Last Starfighter is a parallel precursor film of sorts, and my favorite pre-teen film. It is fun,lively, and oh so 80’s. Alex Rogan, least likely intergalactic warrior, breaks the record on a video game at his trailer park only to be approached and recruited by  the game’s creator who needs a Starfighter in space. Alex is left with a decision to sacrifice known for unknown and use his innate skills to take down the enemy in the real universe or go back to playing games.

Or is he? Where ignorance is bliss, knowledge negates choice. Just as Truman could never have continued the Truman  Show once he knew the… truth. In the same way, Jack from Lost, knows he must go back and save the island and the Little Mermaid will never be content to swim for life.  Heroes like these stand alone, optionless on the platform only to bow and wish the afflicters a hopeful “Good afternoon, good evening, and good night.

Innocence has its own beauty. It equates with child-likeness. Harrison Ford and Viola Davis do an excellent job in this film of grieving its loss when weighing the cost in the light of war. Highlighting defensive strategies allows audiences to root for underdogs. Good guys must win, until the plot twists and we don’t recognize the good guys anymore. Ender’s twist ending unmasks the essential question of the film, and therein his heartache as well.